Choosers: The inventors of tomorrow 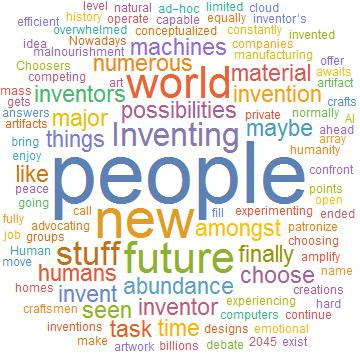 At around 2045 computers, if we still call them by that name will be capable of fully researching and Inventing new stuff that we have not seen or maybe even conceptualized before. They will invent so many new stuff so rapidly that we will be overwhelmed by new creations.

The major job of the inventor of the future would be to choose amongst billions or even trillions of possibilities all equally valid and efficient.

Nowadays to invent a new artifact of idea, an inventor will normally do research and work hard experimenting over and over till she gets the invention right, prototyping and then maybe finally move on to mass producing. In the future the inventors task will be limited to choosing from amongst an unthinkable array of possibilities. The inventor’s task will be much about the question; can you choose stuff that people will like? That will be the major problem of the future, not can you make it.

Although many open ended questions will exist where AI will be constantly searching for answers, most of the time, we will be going through all that has already been invented.

A few humans will still enjoy the art of inventing and will continue doing it the traditional way. Many people will still patronize these people like we do for craftsmen today. Human made inventions will be purchased as crafts or as artwork.

Most people will go ahead and search for designs and solutions to many of the problems that confront them. Many companies will offer invention as a service from the cloud. Some people will have private inventing machines in their homes sending their prototypes to manufacturing services. Most people will run their own production.

This new system of things will fill the world with so many more artifacts than we have ever seen in the history of humanity. When you go out you will see products that are as numerous as the things we see in the natural world. There will be numerous standards through which people can operate at the same level. There will be ad-hoc groups here and there advocating for this standard or the other, most of the time with thousands of competing points of view suggested by both humans and machines.