Entertainment and Sport as major forms of future employment 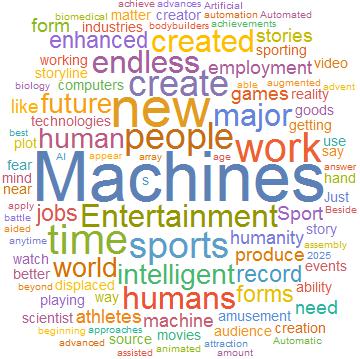 Machines are getting smarter by the second. All over the world programmers, engineers and scientist are working hard day and night to bring about the age of the intelligent machines.

Just like the expedition to the moon and all other great achievements mankind has embarked on in the past, we will eventually achieve the goal of creating intelligent machines there is no stopping it’s only a matter of time.

The prospect of humanity in possession of machines that can outperform any human or groups of humans in cognitive tasks that we depend on for living on earth has created fear in the hearts of many. Many people do not know what to do next after the point where it will be much cheaper to get a machine to do a task than getting a human to do it. The major fear on everyone’s mind is the matter of employment. If machines do the work, where will we get work.

Although some people say new jobs will be created, these new jobs will never be as plentiful as they once were. In the beginning of industrialization starting with the assembly lines, lots of people were needed to work hand in hand with machines to produce the goods that brought a higher quality of life to humanity. But as time progressed and these machines increased in automation, more and more people were displaced from their place of work.

With the advent of advanced robotics, we have seen even more people displaced from work than ever before. When I hear people say there will be new jobs, I wonder how much of these jobs will be created.

The partial answer I have succeeded in coming up with is that the entertainment and sports industries will be the major employers of the masses in the near future.

Although the manual work we have to do to produce the goods we need will be taken over by machines and whatever is left will be in high competition and not sufficient enough to cater to the population, there is one ability that humans are never short of, that is the ability to endlessly create amusement.

The amount of variety we can come up with in entertainment is mind boggling and will be even more so in the near future. I see from 2025 and beyond a massive explosion in new and old forms of entertainment enhanced by the new technologies of virtual reality, holography, augmented reality and ever more powerful computers.

Cheap easy to use tools assisted by Artificial intelligence will enable creators to churn out an endless array of amusement, leading to a more fun filled world.

Here is a list of some forms of technologies and entertainment that will be the major preoccupation of tomorrow.

Automated scripting for movies: Most of the time the human will insert a story seed or title and computers will generate the plot, storyline and script. All the human will need to do will be to customize the story, requesting more detail or different scenarios than what has been provided. By working with Intelligent machines the creator will produce endless novelty every time and anytime. If you really want something new, the AI could connect to the database of all the stories every created and try its best to create a plot or storyline that may not have existed explicitly before.

Automatic creation of video games: By playing millions of video games, Intelligent machines will be able to create new ones, or even deriving games from movies, online stories created by other humans or machines and or integrate every other source of information, from biology to physics to any other domain. Extracting patterns from all these fields these machines will create completely novel material most of time. The job of the human creator will be to apply endless customizations which will then feedback on the creation processes of the machine to create better stories in the future. With a network of these machines learning from many humans in a democratized way, the programs will get better every time.

We will have humans playing roles against holo-characters (holographic characters).

Entire animated feature films will be generated by Intelligent machines and many more.

Another major field of engagement will be in sports. With the majority of humans without any work and without the need for one, we will have sports events like the Olympics that run for several years at a stretch. There will be another type of global sporting event called Enhanced Sports. In this genre of sports there will be no restriction on the use of performance enhancing medications, in fact they are the main attraction of the sport. Just like people go to watch steroid loaded professional bodybuilders, we will watch enhanced athletes breaking record after record. Beside a world record it will be indicated that this record was broken in an enhanced state. The regular unenhanced sports will still go on and carry their own audience.

Enhancement in sport will no longer be a taboo in this new way of things, rather doctors, chemists and other scientist will battle for supremacy using their athletes as the icons of their work. Successful approaches could fuel other biomedical advances.

New types of sports will be invented and endless sporting events will be organized at various locations around the world. This will be a major source of employment in the future both for the organizers and athletes. The audience will have endless places to spend their money on.

Generally, the leisure industry will dominate all other industries in the world as humanity finally comes to a rest after brutal millennia of survival existence aided by the most feared invention of all time, the Machine.