Nigeria and the Computational Future 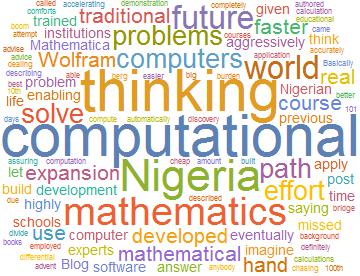 Mathematics built the sky scrapers, rockets, planes and all the other comforts of the developed world. But does this mean that Nigeria has missed out completely? I say a big no.

Although it would take a massive amount of effort to build Nigeria using traditional mathematics to the level of the developed world, an effort that we might not be able to make, there is a far easier path opened up to us in recent times. This path is the path of computational thinking. In a previous post on this Blog titled The Computational future, I included a link to a blog post authored by the venerable Stephen Wolfram on the topic. It is an interesting read and I think it sets the foundations for thinking about a future for computation, we only need to apply the advice given there to our situation in Nigeria.

Nigeria can bridge the divide between the developed world and us by aggressively pursuing computational thinking. Basically we can think of computational thinking as systematically expressing problems to be solved by a computer. In the days before the advent of cheap computers, most engineering and discovery was done with traditional mathematical tools with highly trained experts. But due to the fact that the educational quality in most Nigerian institutions is questionable, we might never have enough people proficient enough in traditional mathematical methods to build the society of the future. It is with this limitation in mind that I see a major path forward is to aggressively chase computational thinking, enabling us to use Computers to solve the problems that highly trained experts of the past would have been employed to do by hand, thereby accelerating our own development and thus the development of sub-Saharan Africa.

Am I saying here that we should not study mathematics? No that is not what I am saying, what I am describing here is a scenario where we use computers to solve the mathematics. Rather than spending time mastering hand calculation, we would be better off learning to use computers to solve problems faster and more accurately and thus save our students the effort and burden of performing hand calculations freeing their mind to focus more on problem modelling.

The Wolfram Mathematica software can best be described as a miracle, input some differential equation on one line, press shift+enter on your computer and boom there you are, the answer is provided. Now one would imagine that this is a lazy escape path but let me show you something, let me show you that in the real world, mathematical problems are not as simple as our exercise books makes them.

Ok time for some demonstration, supposing you were given the following polynomial expression for expansion:

Well if you know your mathematics well with some effort you would solve the expansion to this:

Now imagine you were dealing with some problem from real life which requires that you do the above expansion to the 100th power instead of the 10th what would you do then? Well I would not advise you to attempt doing it with your hand because this is what the result would look like: 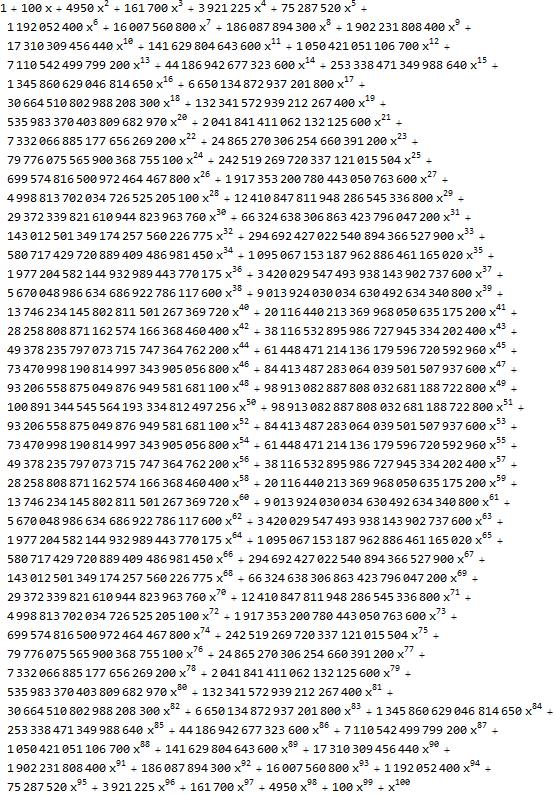 Well I am no genius and definitely did not compute all that on my own, I simply typed:

Into a Wolfram Mathematica notebook and that answer came out automatically. This is just a tip of the ice berg, there are so many other things that one can do with the software.

So what can Nigeria do? Well the first thing is to institute a course in all Nigerian institutions called Computational thinking 101, this should be the first course anybody should learn because it establishes that mental background that enables one apply computational thinking in the specific course one is doing, enabling one to understand the courses faster and do more experiments rapidly leading to faster growth of knowledge and eventually rapid application in the real world.

With computational thinking instituted first in our higher institution and eventually in our secondary schools and even primary schools we will be preparing Nigeria for the computational future and assuring that future generations will be empowered for life.