Make people prosperous and population will grind to a halt 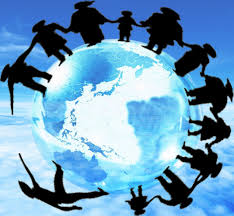 Many people are worried about the rising global population and are desperate for a solution to it. Although I am of a different mentality and believe that we can support a larger population if we have the proper technology and tolerance of other people, I will proffer a simple solution to all those who consider this a problem.

Many countries have sought drastic measures to limit population growth, while some have gone overt by instituting direct laws to limit childbirth, some have gone covert by making it extremely expensive to raise a child. The problem remains with the other countries who do not have a solid structure, like most undeveloped countries, and thus cannot enforce any solid system limiting their populations.
To me most of these methods of limiting population growth, covert or overt have failed, they have only slowed down the growth of population by a tiny bit and have created more problems than they have solved. Many of these 'developed' countries who instituted some form of population control, although their methods are very rational have ended up creating social problems they did not pre-contemplate.
My simple solution requires guts to apply, simply make the entry level to prosperity lower. And that is it! People will stop giving birth to children as much as they do today when they can enjoy life more.
In my own personal observations, since I live in Africa, I have noted that where there is poverty there is abundance of children. Although one can attribute this to the fact that if you are rich and educated you will have greater access to contraception, etc. To me I see a different scenario. People want to own things, a rich man wants to own houses, planes and boats, a poor man wants to own children because that is the most accessible acquisition.
When I see a lot of poor families who can't travel or have leisure because of how they struggle daily for existence, I see them very happy with their large families of 8 to 10 children! They gather every evening over their megre meals and tell jokes to each other and laugh till it's bedtime. The sophisticated individual from the developed country is trying to take away the only source of joy from this people by telling them it's better to have fewer children, they don't see it that way.
The rich man might just have 2 children and that is enough for him, he has too many places to travel to, too much fun to be had than spending time with their children or having more. Many people also choose to be childless for the rest of their life even though they are perfectly fertile, this is very uncommon in developing countries and more common in developed ones. This might be for intellectual reasons or just to have nothing to bother about. Although rich people also have large families, this is increasingly rare as consciousness shifts from passing on genes to passing on riches.
Poor people on the other hand tend to have more children, because they see their children as assets and insurance against old age. A rich man can pay for a nursing home, but a poor man gives birth to as much children as possible to increase the probability that one out of all those children would love them enough to stay back and care for them, or will be successful in life to be able to afford the nursing and care they will actually need in old age.
So rather than trying to make life harder for developing nations and some people in developed nations to make them reason about the difficulty of their situation and discourage them for giving birth, I think making it easier for people to be prosperous will make them want to enjoy life more and thus not be bogged down by the responsibilities of caring for a large family.
Just look at most developed nations, they are having lesser and lesser population growth, Singapore runs ads encouraging people to have children, there is a new culture of celibacy in Japan, Germany is seeing almost negative population growth. From these few cases and others that I have not included, I think developed nations should improve the welfare of their poor and also look for ways to help the developing nations to rise to their own power, by easing the entry level to success and not making success in the world be based entirely of massive intellectual of physical prowess. Those who can't fend for themselves should be taken care of by those who posses extra abilities, it is through this illogical charity that we will help the world out of its present and future perils.