My Hightech Hypothesis of Reincarnation 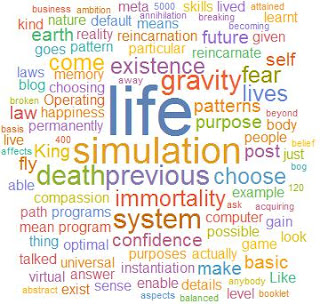 The basic premise behind my belief that reincarnation is possible is that life and the entire universe is a simulation. A simulation that could be running on some computer system of unimaginable sophistication but no different from the basic nature of our computers, because it is also a universal computer.

If we exist in a simulation as a computation, then it should make sense that we should be able to reincarnate repeatedly, to strengthen the skills we already have and gain new skills. In my post about we existing in a virtual reality simulation, I talked about the purpose of our existence inside this simulation, and also in my small booklet the The Universal Operating System which is the very first post on this blog I talked about the purpose of existence which is happiness. Indeed, happiness is actually a meta level purpose that comes about as we gain strength in acquiring other micro-level purposes. For some of those micro purposes, check out the Blog post titled:  We are Immersed in a Virtual Reality simulation called Life.

So, if we take the idea that we exist in a simulation as a given we can proceed to hypothesize furthermore that we are programs and any reasonable system designer would try to be optimal by all means. So, the optimal thing to do would be that the operating system of life would have to save instances of programs on their termination so that they can return after another instantiation to continue the process of mastering the game. If you can have multiple lives in a game why not in the physical world.

Then we might ask, if we live forever, why is it that we do not remember all that happened in our previous lives? Again, the answer is simple, if I were designing such a system I will not want to bog down the program with too many specific memories of its previous instantiation so that it can focus on this particular life and look at everything with fresh eyes. I would enable the program to abstract the details away at death, and extract the basic patterns that were learnt in life, this patterns will form the basis for the kind of life that will be lived in the next.

Like I said the meta level details of a particular life do not really matter, for instance if we had mastered power by becoming a Queen or a King in a previous life and we had to learn compassion in this, which will require some kind of humility, then I don’t think it will make much sense for us to come into this life with all the memory of the glory of being a king. We would erase that memory, leaving the pattern of the self confidence that being a king had given us, this would enable us have the self confidence in chasing our ambition to be more compassionate people in this life because of the circumstances that surround us in this life. Despite maybe, challenges to our compassion, we would have the self confidence that we were doing the right thing. Patterns learnt from our previous lives as kings.

The possibilities are endless and the configurations are beyond my own mind, but with this little example I hope that I have been able to show you how some aspects of life might work.

If we come to look at things this way, then fear will leave our minds, the root of all fear is in the demise and total annihilation of the body, if we know that we will always come back again and again if we fail, then we will have no fear.

So, where does immortality come in this reincarnation business. If we are all going to reincarnate does it not mean that immortality is unnecessary? My answer is no. for example gravity is necessary for keeping objects on earth, we can walk and live life because of the presence of gravity on earth, does it mean that we should not fly, overcoming gravity? No, we should fly. The laws of nature are just temporary limitations that can be broken if we fully understand the laws, for against every law is its opposite which can be attained by transcending the law.

Gravity still affects a flying plane, but it is weakened by the mechanisms that make flight possible. The rocket goes against earth’s gravity completely breaking it and entering a balanced relationship with the earth in orbit. Same goes for the law of death and decay. Although it exists as a default, we can always go against the default states of life.

When death is overcome and rightly understood fear will disappear for the most part. Science will even uncover exact means of tracing an individual’s previous lives because in the future every single data about our daily existence will be stored on machines permanently and in the future, sophisticated pattern recognizers can actually match someone’s current existence to the one she might have lived before.