The Atom is a computer 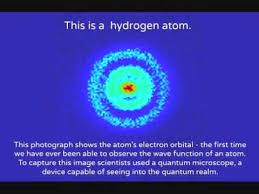 Indeed the atom is made up of other sub-computers, the quarks, the gluons and even the strings that are at the lowest level of reality are all computers. Just like in a distributed computer system, you use many computers, connected together to perform certain tasks, you connect atoms together to form molecules which are also computers.


At the bottom of reality is Max Tegmark's mathematical universe which is made up of computable functions, so we can say that at every layer of reality, we have computers making computers.
The Atom is a universal computer because it can perform any type of computation, all you need to do is link it with other atom and viola, we have a new computer that is computing some function.
The electrons that surround the nucleus of the atomic computer can be seen as a kind of display of the internal computations going on in the nucleus. Whenever something vibrating at different frequencies interacts with some other thing vibrating along a whole range of other frequencies we have a computational system. I seriously think exploiting this vibrationary interactions are the key to building atomic scale computers that compute the kinds of functions humans want to compute.
The components of the nucleus are constantly interacting with each other in complex unpredictable ways, it is their interaction that gives rise to the uncertainties in the electrons. The fact that we cannot locate an electron and at the same time measure its velocity proves that the electron is complex and can compute anything. The cloud of electrons that surround the atom are no more than the moving pictures you see on your tv, only that this time around they are actually displaying information about the internal state of the atom.
Atoms are ready made computational units and we can find ways to make them compute our own functions, this will involve radical new ways of viewing computation and computational devices. At the present time we build computational devices by finding stable atomic configurations which represent electron components on the circuits, their predictable electric interaction is what enables them perform our computation. In the future, rather than force a certain order on the atoms via human engineering, we may learn to exploit the existing order in otherwise chaotic looking molecules, we could scan in our input as some complex frequency configuration and scan out our output as complex frequencies too, leading to radical new means of computation and eventual ubiquitous computation. So rather than carefully engineering computational components like we do today, we will just search for ad hoc configurations and test their ability to perform the kind of computations we want them to perform. Am I saying that we will stop engineering computers from the scratch? No, what I trying so hard to explain is that we will not be limited to the kind of engineering we are doing today and will have far vaster kinds of computational mediums and systems to play with, by combining atoms in several configurations.
So where to does computation stop, well as far as we can observe. The atoms are computers, the molecular combinations are also computers, the nucleotide that make up our DNA are computers, the DNA itself, proteins, the cell membrane, the cytoplasmic components, the cell itself, tissue/organ systems and eventually the brain itself.
There is nothing special about the computation of the brain, it is just that it is easy for us to draw analogies between the brain and our switching based computers. The movement of blood through our bodies, the monitoring of body conditions and the independent actions of organs are all examples of computations. The brain is just another class of computing devices that interacts with other computers located throughout the body. So we can say that we are human computers and the trees are computers too. We are all capable of receiving input from the outside, processing it and returning output, that is the basis of computation.
The whole universe is just one gigantic, computational system, what the total output from all its interactions are we do not know, but the fact that it is computation means that we can understand it.