The whole Earth could be someone's personal computer 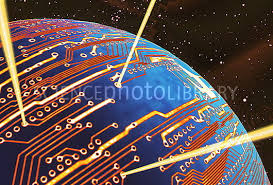 In a previous post, I talked about how someone could be running a neural network on our brains during idle mode. In this post I take that idea further by declaring that the whole earth could be someone's computer. After I declared that our brains and indeed all brains could be someone neural network computer, it struck me that what about the external environment we perceive, this includes the vegetation, the rocks our bodies, which include our brains, the sea, the sky the cloud and indeed everything we could perceive.

I came to the conclusion that it is all part of a computation. The computations on our CPUs are useless if we cannot visualize the results of the computation on our monitors. It is through our monitors that we see what is going on inside the memories of our computers.
Atoms on their own are uninteresting, to make them interesting they have to be used in combination to create molecules and from molecules they move higher up the hierarchy and end up forming complicated structures like human beings. So all the atoms of our bodies are arranged in a pattern that is us, the fully formed human beings.
When we want to make sense of data, we use visualization tools, if we see the raw data as it is, it might not make much sense until we process it through some visualization tool. I would say that If someone was running a massive computation as the whole earth, in order to make sense of the enormous about of data generated, it could be visualized as structured forms, hence all we see around us including ourselves. so rather than a mess of atoms, I seriously think atoms are the bits of such a computation, we have atoms related and structured as forms making it easier to visualize the interactions of the computation structures that make up the earth.
So the brain is some patterning of atoms that is running some specialized code, that interacts with the body that contains it and other bodies and the environment to alter the computational landscape of the earth.
This does not only apply to the natural world but also our man made artifacts. When we go about altering our environment with artifacts like cars, skyscrapers, bridges, etc. We usually do it for our own reasons, we need cars to move about and we need skyscrapers to live in. But I am saying that these actions we are performing to serve our desires are actually the effects of some computation that is going on at a level so abstract that our typical laws of physics do not apply. Just like we cannot predict the output of complicated computational processes, our artifacts could be side effects of some computation that we know nothing about, although these structures serve us, the atomic conglomerations the come to make up such artifacts might actually serve as a graph visualization for another entity or group of entities looking in from another layer of the abstractional hierarchy.
The laws of physics govern all that happens in our environment, but just like we arrange transistors on a circuit board utilizing the laws of electromagnetics but also creating the laws of computation, our physical world, designed to obey physical laws, could be part of some higher computational law.
Indeed our whole universe with its planets, stars, asteroids, comets and other structures could just be data visualizations of some computational process. The entire sphere of our observable universe could be a distinct computational system, owned by somebody and it is separated from other Level I universes by the opaque screen of the cosmic microwave background (CMB).
In summary, all we see including ourselves is some sort of visualization of computational processes. Our brains are computing even though they are part of a bigger computational system of the whole earth.