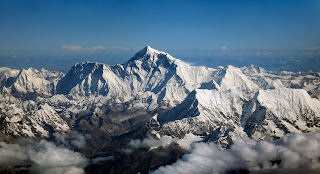 Sometimes the scale of the work we have to do overwhelms us and we find it very difficult to take the much needed little steps that will eventually lead us to our goals.

Many people choose to hack their goals to pieces by cutting it small and discarding the rest, and when they attain this tiny dream there is usually a sense of regret that they could have done better, have pushed themselves a little beyond their limits and thus would have ended with a greater sense of fulfillment. This is why I say THINK BIG AND FOCUS SMALL. You don't have to give up your enormous dreams, you may just need to give them a little more time.


If you are ready to give your dreams sometime to materialize then you will notice that some of the tension and sense of overwhelm will be reduced. But for some of us no matter how far in the future we see our dreams the sense of overwhelm coming from an overactive imagination that shows us everything in endless details can still seem to cause us much sleeplessness. A nice way I have found to hack this in my life is to THINK BIG AND FOCUS SMALL.

THINKING BIG AND FOCUSING SMALL is a small technique wherein you don't see the final vastness of your vision all the time. You choose the grande goal, visualize the end result to as much detail as you can withstand and then when it comes to implementation, all you simply do is just focus on one tiny aspect of the entire gigantic plan, this is the FOCUS SMALL part.

As an example if your dream is to build an artificial planet just like that in the movie Elysium, note that I did not say colonizing Europa, one of the moons of Jupiter, because I think in the case of Europa you need mostly think of transportation and maybe means to use materials already existing on the planet or nearby objects and your own rocket space. Although Europa is not very different from Elysium in scale and complexity, to my own brain, fashioning a planetary scale object is a much harder task. The opposite might be the case in your own mind.

Now if you have decided that you were going to build your own artificial planet, focusing all the time on that big goal might kill you so I will recommend you focus on a small scale problem like building an independent self sustained ecology here on earth, then maybe focus on material engineering for the hull of that object taking note that it might be bombarded by space objects etc. Focusing on this small goals and achieving small milestones along the way might reduce the fear that will come to your mind from time to time when you imagine the later stages of the project, but focusing small will spare your nervous system of much damage.

So whenever you feel overwhelmed, THINK BIG FOCUS SMALL. Get it going with the small tasks, you will eventually find means of achieving the major ones.