Your body is a 3D interface 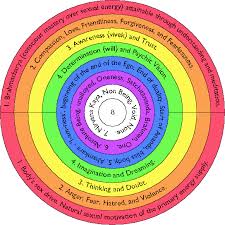 Your body is a 3D interface of your identity. The Identity exists on another plane of abstraction beyond the body. It is what many have called a soul. Your body represents information from your identity with physical conglomerations of atoms.

The conglomeration can be viewed at a different level of abstraction as your cells and eventually your organs.
Just like the display of a computer shows us the information currently residing in its memory, at least most of it, your body displays actionable data from your identity.
Our human body represents the information necessary to identify a human entity, other animals in nature possess identities that are physically expressed as their bodies.
I think a major pursuit of the science of the future will be to extrapolate back to our identities from observing the structure, function and state of our bodies.
The chakra systems of the east have expressed this idea in the form of chakras being the inner motivators of the physical body and some have even gone on to draw visualizations of the structures of these chakras. I do not repeal the idea that there are chakras that we could see if we opened our vision but I declare that our identities are at a level abstraction such that our 3 dimensional brain will not be easily able to represent its structure spatially. The chakra system could be a sub-mechanism through which this abstract structure I call our identity acts through. It the image above, we could place this Identity as that which lies in the very center.