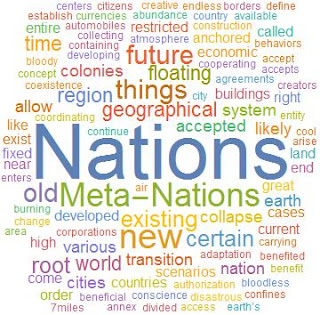 Nations are like giant corporations that occupy a fixed geographical region. They exploit the resources of this region to benefit those who are resident within this area. In the near future, there will be meta-nations. Since every available space on earth has been divided and shared among various nations, the meta-nations of the future will be nations within nations. These new nations will span many geographic regions. They will be like the colonies of old, only that this time around, you will not need to annex an entire region, to rule it. Rather these new nations will legally purchase land within various existing nations and establish colonies within them.

These new nations might not have the structure that existing nations have, many might have currencies and many might not. The founders of these new nations will come up with various creative ways to express the concept of a nation. In many cases, they will not be called nations, some might be called cities and some might just be research centers. But what will define their nationhood is that they will offer permanent residency for their citizens and will be as self-sufficient as possible. The root countries within which they exist will give them certain rights to do certain things that might be only be accepted within the walled buildings, even when these same things are not accepted in the root country.

These nations may have restricted access in many cases, requiring levels of authorization before someone is let it. There might be laws that allow only certain behaviors or certain objects. Some might prohibit the carrying of weapons of all sorts and some might even reject gas burning automobiles. The possibilities are endless and are subject to the imagination of the creators.

These nations will continue existing innocently within their root nations until the time of the great collapse. The time of the great collapse is a time in the near future when the current system of things will come to an end. This might be a physically disastrous end or quiet passage of the old. The major source of the collapse is from the economic sector. The current economic system of the world will be found to be glaringly lacking in many things and not fit to pass on to a future world of radical abundance. While some nations will sense the inevitability for a change in the system of things and a gradual adaptation of the new, some other nations will fight violently to preserve the old order which benefited a few at the expense of many. If the majority accepts the new order, the transition will be painless and bloodless, but if we hold on then there will be violence on earth, which might be the last. In any of these scenarios the meta-nations will thrive. If the transition is accepted painlessly then the meta-nations will be given the full right to exist within certain root nations, without any interference from the root. Many existing nations within existing geographical confines will allow this to happen because there will be some mutually beneficial agreements between the old and the new. The nations most likely to allow a peaceful coexistence between the new and old are likely to be developing nations and developed nations with a high national conscience such as the Scandinavian countries. Other parts of the developed world are less likely to accept the existence of any independent entity within their borders. In the latter scenario, where the world enters a bloody and painful transition of the old to the new, the meta-nations will still arise, starting out as strongholds where many people will secure themselves and when things cool out they will be nations in their own right. So, in either scenarios the meta-nations are the future.

A meta-nation will not usually be restricted to a fixed geographical region. They will be spread around land, sea and air as colonies, cooperating and coordinating together. A typical future scene is collecting a visa to move from one floating nation to another floating nation in the sky, without ever touching the earth. There could be freely flying floating city either within the earth’s atmosphere or orbiting the planet. And there will be anchored floating cities anchored to specific geographical locations.

The meta-nations with their mostly restrictive physical spaces will spur a revolution in sky-scraper construction that will see buildings, containing entire cities rising to about 7miles high.