Human beings could just be offsite computation units for some ultra-intelligent beings out there in Space. 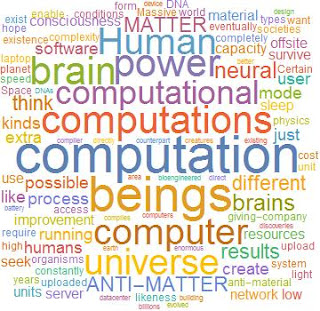 If you look critically at this proposition is not far from the truth as I will explain.

If you were a Massive Corporation with an enormous appetite for computation like Google or Facebook, an efficient strategy which you could use to obtain that extra computation power without the extra cost of building another expensive datacenter would be to give people these computers to use. You could build some custom laptop computer and give it out, mostly to the academic public, for free, in exchange the recipient of the Laptop computer would pay for it by providing it power and agreeing to a term that, there will always be a low priority process running computation for the giving-company during regular use of the laptop by the recipient and the process would be upgraded to high when the user was not using the computer, in the idle mode.

Another requirement could be that the computer never really shuts down. The computer could be designed like a phone such that the only thing the user can do is put off the monitor, while the computer would enter a very low power mode where some computations would be constantly going on, computations the giving-company would want to do but is limited by cost of data center resources. During the low power mode the computer could access the network to upload results depending on whether the user left it plugged to electricity or if the user was on battery mode, maybe there could be no network access on battery mode to conserve power, the results of computation would be cached.

This could bring enormous cost savings for the giving-company because the user pays for the "free device" by powering and securing it. Certain low security operations could be sent offsite like this so that main datacenter resources could be conserved for high priority high security operations.

Now it is my conviction that the entire human race on earth and probably on other planets out there in the universe could be offsite computation nodes for some form of ultra-intelligent extraterrestrial beings.

A human being could just be an engineered computer, that powers itself by searching for its own food. This is because our brains possess far more computational power than we could ever hope to utilize. It is my argument that this is no mistake of evolution, it could be by design, that the extra computational power of our brains could be constantly running processes at the kernel level that has nothing to do with our own computational requirements but the computational requirements of someone else. Why does the brain run constantly, even when we try to make it stop, why does mental activity spike during our offline times, during sleep? Many argue that our brains are pruning our experiences when we lay down to sleep, while these might be true to some degree, I still think that some other beings processes could be executed during this night time, actually I think that when we sleep the results of the foreign computations we have done with our brain would be uploaded to some central control server somewhere in the universe that combines the results from quadrillions or more brains around the universe, what this computation is could be beyond the comprehension of any brain on which the computation runs.

If you were some galactic being that evolved some billions of years before humans, you could have made the same discoveries about the universe that humans are currently making now, billions of years earlier, you could have made massive advancement developing technologies from bioengineering to computer science, and made massive discoveries in science. Somehow you have discovered that you could structure computation as a neural network. You would do neural networks in software and eventually in hardware. By studying your own brain at the deepest level possible, you would also discover microtubule automata and how connecting neurons that have microtubular computation units together to form a neural network could lead to a very powerful computation device.

Rather than building some enormously complicated neural machine that would need constant direct supervision, maintenance and power, you would seek a distributed system that self-powers, this would be the most optimal solution for you.

If your technology was sufficiently advanced you would go ahead to create beings in your own image and likeness, because you have realized that your own brain evolved directly from nature to do computations so if you wanted to have access to the powerful computational design of the universe itself you would have to create a being that is in your likeness using bioengineered genetic material obtained from your own specie.

Once you have a way to interface with the bio-machines, human beings, you could imbue them with the power of consciousness, some software that keeps the being motivated to survive. Certain preprogrammed drives preinstalled in the human would enable it go out and strive for food to cure the pain of hunger, the procreative urge would make sure the humans multiply and hence abundant processing nodes for you.

Consciousness is some software system that will keep the human computer motivated to survive, it will enable it create societies of increasing complexity that will require increasingly higher levels of brain power to survive in, as the conscious unit strives to improve its conditions within the society it finds itself in, the brain is improved. This brain improvement would lead to better outcomes for the human computer and also better and faster processing for the server process running on it, because improvement in some area of the brain results in improvement in every other area of the brain. No improvement is local alone.

If there is a material universe, there is an immaterial universe. The existence of anti-matter has been proven in the field of physics so it is no major leap of the imagination to assume that there could be a universe of antimatter that is opposite to this our world of matter. It is my intuition that the world of antimatter would have laws of physics that are the opposite of the laws of physics we have in this world of matter. This implies that the speed of light might not be applicable in the negative universe of anti-matter then it would be possible to traverse space without the bounds of the speed of light. I don’t want to go into a long discourse about matter and anti-matter, why I brought this up was to help me in explaining how some beings out there in the universe could interface with our material bodies via its anti-material counterpart and extract results of computations from infinitely many brains in an instant without having to work with the limitations of the speed of light and distance. In anti-matter there could be no time, and all the computations done could be uploaded instantly without any problem. The only reason I suggest that this could be during sleep is that this upload process might require that the computation unit, the human being, is not active so all resources could be channeled to the upload process which might be just about syncing the material body with its anti-material counterpart so that the information is uploaded to the anti-material server and redownloaded to some physical servers used by some ultra-advanced race out there in the universe.

Such beings that could engineer human beings with specific DNAs would also seek as much space for the humans to survive on and continue with ongoing computation, so therefore environmental conditions of various types could have certain types of humans or other kinds of beings that could survive in them, with human of the earthly type occupying most of the earth like planets existing at different parts of the universe. I also think that any life form is a computational unit for these beings. Imagine a kind of compiler that compiles code as creatures. So you could write some program and some compiler compiles the programs as the DNAs for different kinds of creatures that could exist on a planet. The execution of the program thus might be the generation of the ecosystem of the planet. With this method different types of computation would be individualized in different kinds of species and all the complexities that arise from their interactions could feedback on the ongoing computation in the microtubules and neurons of these organisms. There are several models one can speculate about all these things, but the core idea is that:
Organisms are performing computations within and between their cellular structures that could not be relevant to their existence in any direct manner.
Some beings are literally running computations in the machinery of creation.
Existence of organisms on a planet might just be a façade, to create self-sustaining computational units for some extra-terrestrial ultra-advanced beings.
Consciousness is just a software system that ensures that beings exist and seek their own self propagation, so that computations can be done on the extra neural capacity that is not utilized by the creation.
Societies increase in complexity so that the neural capacity of the beings existing in such societies could be enhanced due to increasing challenges, this improvements create brain wide improvements that eventually benefit the background computations, the computations that are being run on our neural mechanism.
Societal complexity could also be some kind of partial output from the computations running in different brains.

Some words of hope

Although the thought that we could be mere automatons given a society to exist in so that our computational power could be harvested is a harrowing thought, I have some ideas about possibilities that could give us some hope of escaping such utility.
If we were created in the image and likeness of some beings, that is bioengineered from some primary human stock, then we have the same capacity as them even though we might not be functioning at our peak at present.
Although things like #neuralink will enable us connect our brains directly to computers and give us extra computing power, I seriously think this will simple offsite most of the kinds of computation we want to do to an external substrate and will do nothing to seriously improve us. My suggestion on the other hand would be that we should really study the human DNA, we should seek to study it so completely that we will have full understanding of the programming that it contains. Once we know this we would be able to reprogram our DNA completely making it possible that we personally utilize as much of our brain capacity as possible completely freeing all our computational resources for our own use, shutting off the connection to the server. This will also require deep understanding of the relationship between matter and anti-matter since we might need to block certain connections between the two. We literally have to find ways to hack our own consciousness software which I think is our DNA.

I think it is very possible to overcome this limitations and to eventually become free-beings but it is going to be harrowingly difficult. Remember we are dealing with beings who have at least a billion years head start on the evolutionary ladder.