One way to achieve Interstellar travel 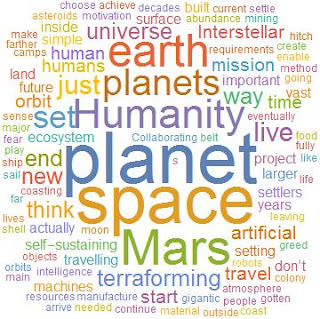 Humanity will eventually need to travel beyond this solar system to other far out systems out there in the universe, this is not a question of if it will be possible but when. To me, Mars is just a temporary landing base, just somewhere we can learn to live outside this planet.

Mars will teach us all the requirements of turning a barren piece of rock into paradise. It will show us how to start an ecosystem from the scratch and how to maintain it indefinitely. This is because starting and maintaining a brand-new ecosystem will be a major challenge on our way to interstellar space using the method I am proposing here.

There are so many human habitable planets out there and it will be a shame if humanity of the future will not venture out to see what’s there.

Although many people are thinking of going to mars because they fear the eventual decimation of the human race, and maybe war and pollution engulfing earth, I don’t think this in the end will be the primary motivation for leaving the planet.

Our main motivation for leaving the planet in the future will be driven by a pure sense of exploration not in possession of current humanity. Current humanity is too scarcity oriented in its thinking to face the vast abundance of the universe.

If we pour food into the ocean because of price controls, I think we are still immature to go out carrying this kind of tiny mentality to vastness of space, we will end up perpetuating our destructive tendencies and eventually polluting the universe.

If we still think of colonizing other planets for the main purpose of extracting mineral resources and not just for the sake of enjoying those planets, I fear our greed is already blinding us to the simple methods we could use to achieve that. Just like a rocket is fueled by hydrogen and oxygen I think the ideas that will enable us go out there are so simple our complicated minds crowded by greed in the majority cannot accredit it.

The future generations nurtured by benevolent machines and built with a consciousness of ease and abundance who are not controlled by simple minded profiteering will inherit space.

This does not mean that the present humanity does not have a role to play, indeed we have a most definite part to play in the gradual exodus of humanity, seeded on earth but not destined to be here forever.

Our first step in doing this is to land on mars, when we land on mars, we will set up a colony inside inflatable Geodesic domes. This will be where the first settlers, mostly engineers and scientist on a one-way trip will stay and set up site. It will be the control center for the robots who will go outside and start the work of terraforming the planet. We will invent the right technologies to help us create an atmosphere on mars while at the same time holding it from escaping out to space. The terraforming machines will be built on site and set up around the planet, this will require local mining, Nano-fabrication, 3d printing and all other associated technologies. The first humans to land mars must be able to create a self-sustaining ecosystem where they can live stress free lives which will enable them survive the Idea of never coming back to earth. So rather than setting up the camps to live miserly, they will actually have to live largely having all the food and space they want per person.

This requirement of a relaxed environment is so important for the lives of the first settlers that it will determine the success or failure of the mission. They must be prevented from psychological stress at all cost or else the mission will be jeopardized within the first few years.

While the terraforming which will take about 30 years to complete, while it is going on the new settlers will be setting up camps for more humans to come while expanding their ecology with both earth based species and many special ones that are created using techniques of artificial biology, which will be very important for our survival on other planets.

In the end, we will have a fully self-sustaining civilization on mars, an extension of that on earth. But this is not the end it is only the beginning.

Collaborating with us on earth, the mars colony will start setting up a return mission to earth. This will not occur until the first landers have spent about 50 years on the planet. But all the while communication and resupply missions will be sustained.

When the first set of humans are exposed to the newly terraformed atmosphere of life, after extensive testing of other mammals, we will have become a multi-planetary specie. The next step after this is interstellar travel.

With both planets collaborating, we will launch the largest project ever in human history, larger than settling on mars itself. We will have to build a planet sized space ship with which to sail the vast emptiness of space to arrive at earthlike planets where we can settle for a while and later continue our mission to fill the nooks and crannies of the universe with earth rooted humanity.

This planet has to be no smaller than the size of earth’s moon and will be built with material harvested from the asteroid belt. This is why I have always said that it is very important that humanity develops full blown artificial general intelligence because without it I don’t think we should venture like sail boat riding sailors of the past into the vastness of space. Without a superior mechanical intelligence helping us, it will be very difficult to make interstellar travel.

Fully automated, self-replicating robots will set up camp on many of the asteroids in the belt mining the materials while supervised by an AI overlord. Over the course of some decades they will manufacture a huge shell the size of the moon.

We will not dwell on the surface of this sphere but inside. The residents of mars who have actually experienced adapting to life on a new planet will lead their earth neighbors by being the first to settle in the interior of this gigantic sphere. Inside it will be a central source of lighting powered by fusion to serve as an internal sun. on the inner surface, will be lush vegetation providing all the requirements of the humanity that will be resident there. With technology and resources of two planets supporting the project and lots of volunteer human and machine labor this project will actually be a success. Water will be gotten from the asteroids as well as the material used to manufacture the soil.

The exterior will be kilometers’ thick ultra-dense shell with external shielding from both radiation and space objects travelling at any speed.

When the new artificial planet is ready it will be tested for several decades before being set on its path to space. The thrusters fitted on the surface of the planet will have the job of guiding if from one orbit to another and that’s all. This gigantic space ship will operate basically on gravity by attaching itself to the gravitation fields of larger and larger objects, it will coast around their orbits from one end of the orbit to the opposite side before jumping out of orbit and further into space in the direction desired till it finds another gravitational field to hitch unto and coast that orbit as far and as long as is needed.

With this method as we move towards other planets, we can live comfortably on one while all the way travelling farther and farther into space.

When we arrive near the planet of choice, we will hitch onto a nearby orbits and send probes to the new planet, if its suitable, then we can start dispatching machines there to set up the place, followed by humans. This can ensure that we make the forbiddingly vast distances of space bearable, by not worrying about beating the speed of light but just coasting along the universe in a self-sustaining planet.

In a sense one can call the earth a spaceship too because its coasting around space in a galaxy, only that this time around there is no driver and we don’t know the destination. Lol.

N/B we can choose to keep our spaceship planet because many people would have gotten used to it and would not want to leave it but continue travelling, while many will choose to go out and live on the new planet we just found.