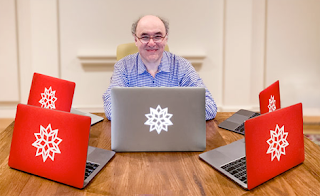 Happy Birthday Stephen Wolfram! A short essay of my experience with this great mind

I was always filled with self-doubt before I met Stephen Wolfram in 2017. I had studied so much for so many years but had been unable to express my knowledge to the world especially in the form of writing. I would write and discard my work so many times because I felt it was not good enough. When I got invited to the Wolfram Summer School (WSS17), my life took a quantum leap from that moment.
On meeting Stephen Wolfram I was a little scared. I had read his tome, A New Kind of Science, like a bible before then and was amazed at the sheer enormity of his intellect. On my way to Bentley University for Summer School, I was pondering? what could I say that would even make sense to such a human being with so much knowledge of everything?

Please if you haven't done so pick up A New Kind of Science to see what I am talking about. The book is so deep, you can't fathom it's depth because as big as it is, it is a massively compressed version of a huge research enterprise that has been encoded in its pages.

Nothing prepared me for my first encounter with this great man, and like I always say "My Master".

Stephen Wolfram was totally opposite from what I expected. He was a nice, listening and very understanding human being that can connect with you at whatever level of intellectual development you were currently in.

He could talk about the most complicated developments in modern physics or give you advice on how to go about your projects or ideas.

I was totally shocked at his humility and humanity considering his achievements.

During the summer school, you could see him eating with us in the cafeteria, which is something impossible for someone of his stature from where I come from. During these meals he would discuss with students and staff alike, explaining advising and also listening.

One peculiar thing I noticed was that people call him by his name directly. I could never get myself to do that. In my country you don't call such a "Big man" by name you must use an appellation and if possible bow down when you greet. I called him Sir most of the time and would bow slightly when I greeted him.

Considering the financial success of his company, he could be anywhere in the world that summer, but he choose to spend it with us. Mentoring and guiding us through our projects.

Also I noticed something which was the most powerful confidence booster I have ever gotten. During the poster sessions where we display our projects so they are assessed. I noticed that when he was talking to a student he was so positive about the future direction of whatever project they were working on. He would nicely point out mistakes but give very solid encouragement as he pointed out what you actually did well and gave you advice on what you should work on and how the project will generally evolve towards the future. There was never a moment where he blankly criticized any project in a way that would discourage the student.

When I returned back to my country after WSS17, I was filled with fire. I got the confidence to self publish my largest book ever (a 379 page book on programming). I was arranging workshops and teaching people about the Wolfram language and Artificial intelligence which are my favourite topics.

Stephen Wolfram boosted my confidence and strengthened my individuality. He made me realize that my own ideas are valid and while nothing is 100% correct, ideas are just the first step towards something greater, the initial impetus to growth, just like a seed.

I will be forever grateful to this great individual who saw my potential and gave me a chance to light my fire.